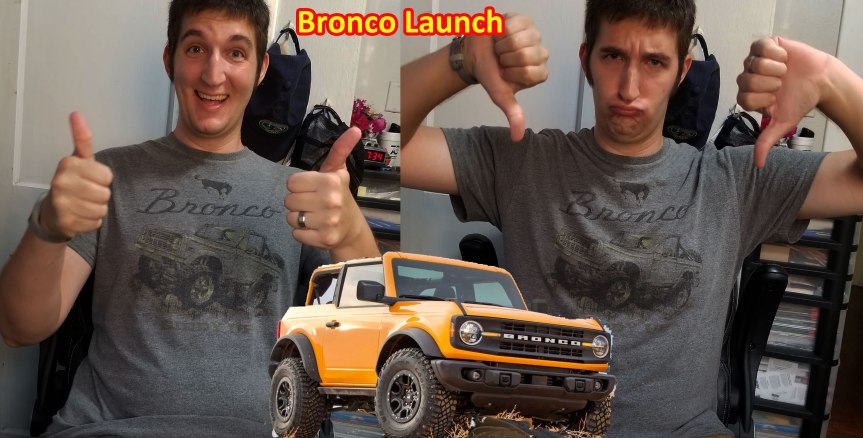 Ford introduced the Bronco on Monday night and it was met with great fanfare and rejoicing. I have been incredibly excited for it to debut and would love to have put down a deposit on one. The website to reserve one crashed almost immediately. It will be a very successful and popular vehicle. But for as hyped as the Bronco was, the launch, especially being all virtual, did not go as well as it could have in my opinion, and here is why.

Ford teamed up with Disney Creativeworks to create three short films about the Bronco directed by Jimmy Chin. You can watch each film here, here, and here. They were shown around the 8 o’clock hour on Monday, July 13th. One on ABC, one on ESPN, and the last National Geographic. Ford also did a virtual launch on their YouTube channel.

After watching all three, I now see what Ford was trying to do and where they were trying to go. They are trying to say get off your butt and go out in nature. Stop watching it on TV, get in a Bronco, and go live. They want to show they are going back to their roots, ready to tackle the tough terrain and take on Jeep. It is showing that Ford has climbed up out of there old ways because each film has climbing in it. Jimmy is not just an award-winning film director, he is also a climber. That is evident in all three short films that he made. The climbing aspect was much better in Jimmy’s own film than it was in the other two.

Jimmy’s own film was just much better overall. He did better at making the Bronco a part of his story, sort of like a supporting role, rather than just a vehicle being driven by a celebrity. I do not want to belittle those celebrities either. Their stories were amazing and they are awesome people. I just don’t think Jimmy could incorporate the Bronco into them as well and it seemed more forced and less natural. But that is simply my opinion.

The main issue I have is this. For as much hype that had been put into these films and the Bronco launch in general, it was insanely overrated. It is also ridiculously hard to find where they said they said they were going to place these films. They said they would be available on Hulu starting July 14th, the day after the launch. Maybe they were there. I wasn’t able to check. But, I did check on July 16th and did not find them. I searched, but I didn’t see anything Ford or Bronco related. Therefore, I went to YouTube. All three films are there but they have so few views in my opinion. Ford really dropped the ball on these films, I think. The most views one of the films has is 272,000. You might think that is a lot, but when you look at the live launch they debuted on YouTube, that video has over 2.8 million views. The films to me were a total dud and a total distraction.

Ford has had issues with launches in the past, especially the Explorer. If you want to hand Ford a pass because of the pandemic, that is fine. I will cut them a little slack. But really, they have rumored the Bronco for YEARS. Ford kept changing the date because the first launch date was set to be in the spring of 2020. Then the pandemic hit and caused them to set a new date. That date was July 9th, which was OJ Simpson’s birthday. How did they not know that? When your vehicle is associated with something like that, one would think a simple Google search would tell you a birthday? Not intentionally doing that, and wanting to not cause controversy, they moved it to July 13th and said all 3 films would come out across 3 Disney network of channels. Then there would also be something on YouTube. Yet, in none of these did a CEO get up and say anything about the vehicle, or show one in action in real life. Everything was staged and filmed prior. Nothing was live. There were hardly any facts given that we didn’t already know.

If it seems like I am ranting and long-winded it is because I can’t seem to articulate how confusing this launch was. My point is this. It should have been a very simple, inspiring, and proud event. In reality, it had very few of those things.

Let me be clear though. The Bronco launch did not fail. There was so much hype about it to begin with that it really couldn’t fail. It just wasn’t as amazing as it could or should have been in my journalism degree, automotive enthusiast opinion.