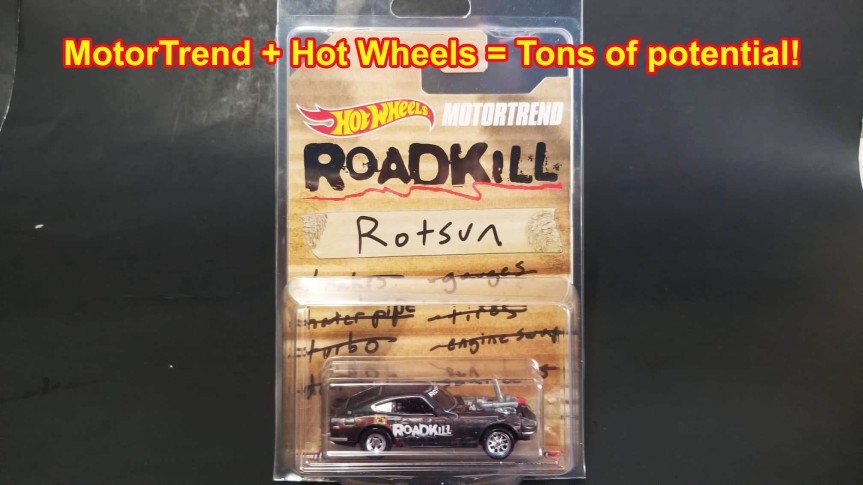 Recently, Hot Wheels and Motor Trend teamed up and created an exclusive pair of diecast cars if you signed up for a new account of Motor Trend On Demand. New account users would receive the Datsun 240Z made famous by the show Road Kill. On the show, the hosts modified the car with a massive turbo charger and exhaust pipe and named it “The Rotsun.” Hot Wheels made that car so subscribers could have both the before and after version of the car. The photo above is the after version. I am still hunting down the before version.

With Hot wheels and Motor Trend collaborating on projects now, and Hot Wheels now experimenting with cars coming already crushed, could we see more cars from Roadkill and other Motor Trend shows? I’m sure all of us what like to see Blasphemi as an official Hot Wheel. But there are so many more that could be done. The Draguar, the Mazdarati, Stubby Bob, General Mayhem and General Maintenance, and those are just from Roadkill. Dirt Every Day has fantastic examples of vehicles as well. Tube Sock and the Alabama Army Truck come to mind.

I’m curious to see how this partnership continues into the future though. Because, the problem with the above mentioned promotion was that the account MUST be a new account. Current subscribers would have had to create an entirely new account in order to take advantage of getting the cars. That to me seemed like a terrible idea. Hot Wheels already has the Red Line Club where members pay a yearly membership fee to have access to cars only available to the RLC. They come at a cost, normally around $30 a car. I don’t know why Motor Trend doesn’t do the same thing? I am a faithful subscriber to Motor Trend On Demand, and WOULD HAVE BOUHGHT the set of cars from Motor Trend if given the option. Merchandise is supposedly a profitable source of income from what I know about business. Hopefully Motor Trend and Hot Wheels have learned from this situation. Hopefully there are more car choices soon and available to all subscribers. And if they could still keep them somewhat exclusive and limited, that actually might be cool too.

Nissan has launched an all new Frontier mid-size pickup truck. It is not a full size pickup like the Titan. There are mixed reactions to the new Frontier in terms of its capabilities and options. People also think that Nissan is to late to the game in the mid-size truck segment. But, overall, the truck on paper appears to be capable. It looks like a truck should as well, in my opinion, so that helps.

Nissan also recently launched a new Pathfinder. Upon seeing it, I started to think about some reports that I read recently that have indicated Nissan dealers are asking corporate to bring back the Xterra. With the popularity of off-roading and many of Nissans competitors resurrecting iconic nameplates with incredible capabilities, Nissan dealerships are saying customers will buy an Xterra if it were on the showroom floors. They also know they need something to compete with the likes of the Ford Bronco Sport, the Toyota 4 Runner, Land Rover Defender, and others.

I am beginning to see how that can come to fruition based on the new Frontier. I am hoping Nissan thought about this ahead of time and planned accordingly to potentially make an Xterra from the Frontier platform. It would simply be the Frontier without a bed and connected to the cab, as I have demonstrated with the above Photoshop render. The only problem is if the Frontier is innovative enough, to use it as a base for an Xterra, and will it live up the expectations of customers? As controversial as it would be, I think that it would. Nissan can’t wait on this if they want to get money from that market.

While we don’t know what the price of the Frontier is yet, Nissan is very extreme in pricing. They are either incredibly affordable, budget cars or they raise your eyebrows in astonishment to what could justify the high price they are asking. If the Frontier comes in at an appealing price, and sells, then I think they will easily green light an Xterra and we might see a new version on the road within 2 years. What do you think?